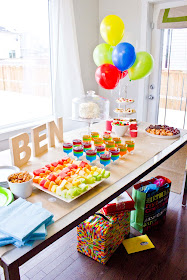 A couple weeks ago we celebrated Ben's first birthday party. It was something I looked forward to for quite a while. Coming in just one day after Christmas, however, I knew I would have to do a bit of advance prep. I wanted to create something special and non-Christmas-y if that makes any sense. I mean, it's not like Ben really understands or cares what's going on right now, but when he's bigger he might not love the idea of his birthday piggybacking one of the biggest Christian holidays of the year. I wanted to make it distinct and separate from the get go.

Like most things, I tried to keep it simple and achieve high impact with just a few pieces. Some streamers, a few balloons, and a small assortment of finger foods seemed to do the trick. I picked up some colourful plates and napkins a few weeks earlier. No elaborate themes, no child shrines posted on every wall, just family, friends, and of course, cupcakes.

We had a short afternoon soiree, just after lunch which seemed to accommodate most nap time schedules and we were really fortunate to have a great group of people come and support our little Ben turning 1! 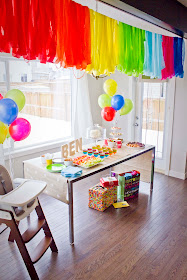 Decorating for a kid's party is pretty darn fun if I do say so myself. The streamers were so dead simple - just looped them around a string and hung it up. I had a few requests about them so I guess they were a hit! Did't break the bank either. 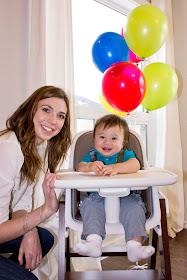 The birthday boy and his mom - all smiles at this point. A big thanks to my great friend, Sarah for grabbing my camera and snapping a few pics. It's nice to be 'in' some of our photos once in a while too! 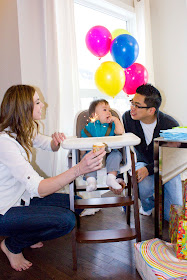 We had about thirty people gathered around to sing "Happy Birthday". This next sequence of photos should illustrate pretty well what happened next, ha! 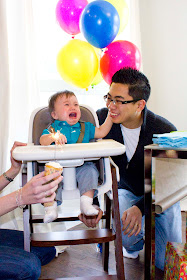 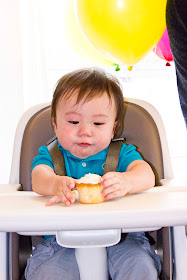 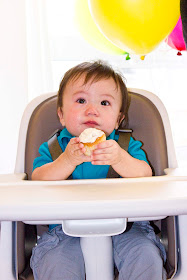 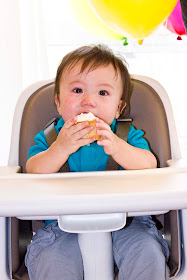 So yeah, the poor kid was a bit overwhelmed by all the attention, especially after a few days of his normally quiet house now full of people visiting for the holidays. Ben usually loves the crowds but even he has a limit. Luckily cupcakes make things all better! 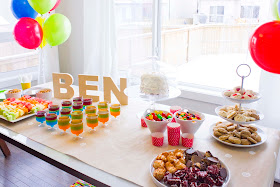 The jello was a huge hit for the under 2 crowd. You'll notice my attempt to get rid of some holiday baking - I think most people were already sick of it too, though, as not much of it was touched. Oh well! 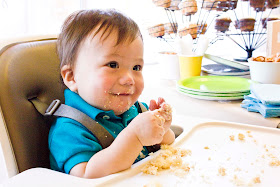 Our much happier little Benji Bear. 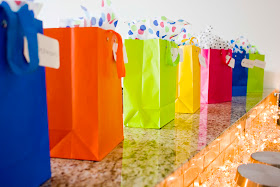 Again, with the treat bags I wanted to keep it simple, simple, simple. I figured most houses had just been filled with an onslaught of toys and games and junk that would have to be reshuffled and stowed away in the already limited storage. I also didn't want to sugar up all the kids when they were most likely at their max. So after stewing over some ideas for a few days it hit me - board books! They're won't make a mess, they don't take up much space, they won't rot your teeth and perhaps they'll kill some time on the car ride home. As one parent aptly pointed out, the whole point of treat bags is to get the kids out of the door without whining about leaving a party - haha. Perhaps that is true!

I think overall the birthday party was a success. I tried not to take on too much but had my sister to help out with a lot of things too. It was fun, it was colourful and it was fresh. We had a great turn out of friends and family that made us feel so loved, and our Ben had a great time (except for that whole singing part - maybe we can skip that next year - haha).
Laurel at 3:50 PM
Share